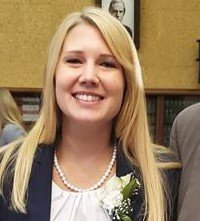 At age 29, Ms. Kane began her studies at Cooley Law School while working full time for the Michigan Legislature.  During her tenure at Cooley, Ms. Kane completed the Elder Law Clinic, which involved counseling the elderly, and drafting wills, powers of attorney, and medical directives.  She participated in the Washtenaw County Public Defendant’s Office, aiding the indigent and learning the ropes of criminal law. She was also on the Mock Trial Board and Law Review.

Ms. Kanes’ scholarly aptitude was demonstrated by being on the Dean’s List and Honor Roll every semester while at Cooley.  Most notably, Erinn twice participated in the challenging and prestigious Jessup International Moot Court Competition in Chicago, Illinois, and in the 2019 competition was distinguished as one of the top ten oralists of all the participants in the international trial competition.

Erinn is a welcomed addition to Kane, Funk, and Poch, P.C. and is currently taking new clients.